Despite the fact that the traffic through North  Petherton slowed down my start by about 40 minutes, as soon as I had set up my table, I was able to continue with the ‘Alice’ scene….

Cupcakes and a fully iced cake that would warrant a place on “The Great British Bake-off” were soon added, along with the inevitable hearts!

Alice’s friend the caterpillar set off to find his mushroom / toadstool but only discovered some daisies, like the ones the white rabbit had collected and placed in the tea pot…..”You’re entirely bonkers!” she declared

Next was the turn of Roald Dahl’s Witches to make an appearance….. 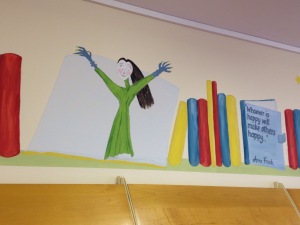 ….and then the Gruffalo, Owl and mouse gradually began to emerge from the woodland scene… Before mouse’s very eyes…. 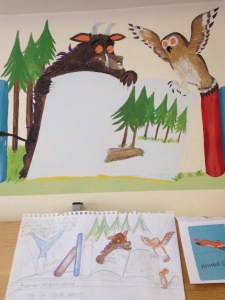 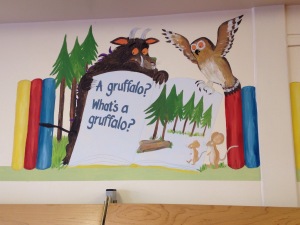 After the merest hint of a lunch break, ‘The Prisoner of Azkaban’ opened its pages and Harry Potter rose up on the back of an enormous bird/flying horse…. 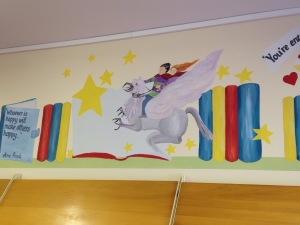 There are still spaces on the walls above the bookshelves in the new library, but plans for Peter Pan and a popular new novel by Neil Gaiman – ‘Fortunately, the milk…’, will be added as soon as I can return…..

What a precious feeling to be so excited in the morning to go to ‘work’…. It feels such a treat to do what I love to do so much…..and find that others actually like what I produce is such a bonus!!!!! 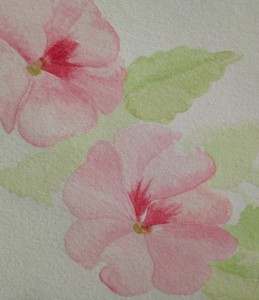 Busylizzie Art – if you would like some large-scale wall art, use the contacts page to message me please…..